The other evening, at the prompting of my 12-year-old son, I watched the movie Invictus. The film had been purchased for me a few years ago as a Christmas present by my wife and had gathered dust ever since. It should have been a film I watched almost immediately. It had the perfect storm of ingredients to capture my attention. It was directed by Clint Eastwood, starred Matt Damon and Morgan Freeman (all of whom I rate highly) and it was about Rugby and the role Rugby had played in the birth of the new South Africa. Needless to say, I am a big Rugby fan.

For some reason I didn’t get round to watching it until the recent passing of Nelson Mandela prompted my son, curious about all the news coverage linked to Mandela’s death, to ask to watch it.

As someone of the generation that had grown up with constant news coverage of apartheid and the tensions and violence it caused in South Africa; of increasing pressure to release Mandela during the 1980’s culminating in his release in 1991 and the then remarkable story of change within South Africa that he brought about; I was keen for my son to learn more. The film presented an ideal opportunity to introduce him.

For those that don’t know, the film is based on the book Playing the Enemy: Nelson Mandela and the Game That Made a Nation by John Carlin about the events before and during the 1995 Rugby World Cup which was hosted in South Africa after the dismantling of apartheid.

Notwithstanding the wider lessons of Mandela’s strategy in changing the shape of a nation, at the heart of the film are two key themes which have powerful resonance in the world of Careers Education, Advice and  Guidance as well as for management thinking. One is at the personal level and the other is at the system level.

In the movie, during the course of his developing relationship with Francois Pienaar, Mandela shares with him  a poem that had inspired him and provided a source of determination and resilience to endure no matter what  the circumstances of his 27 years in prison. The poem, from which the film draws its name, is Invictus by William Ernest Henley.

The words of the poem, for me at any rate, capture the essence of a mindset, an attitude to life that is important for anybody to have going into the world. That no matter what the circumstances, you can still have control over your own responses, choices and destiny.

Out of the night that covers me,
Black as the Pit from pole to pole,
I thank whatever gods may be
For my unconquerable soul.

In the fell clutch of circumstance
I have not winced nor cried aloud.
Under the bludgeonings of chance
My head is bloody, but unbowed.

Beyond this place of wrath and tears
Looms but the Horror of the shade,
And yet the menace of the years
Finds, and shall find, me unafraid.

It matters not how strait the gate,
How charged with punishments the scroll.
I am the master of my fate:
I am the captain of my soul.

For educators, building such resilience or grit as Angela Duckworth calls it and putting learners in control of their own choices and decisions is an important part of [careers] education.

The second insight is an altogether more powerful one.

While attending a game between South Africa and England, Mandela recognizes that the blacks in the stadium are cheering for England, as the mostly white Springboks represent prejudice and apartheid in their minds; he remarks that he did the same while in prison. Knowing that South Africa is set to host the Rugby World Cup in one year’s time, Mandela persuades a meeting of the newly black-dominated South African Sports Committee to support the Springboks. He then meets with the captain of the Springboks rugby team, Francois Pienaar (Matt Damon), and implies that a Springboks victory in the World Cup will unite and inspire the nation.

What Mandela recognised was that to build a united nation, the old way of thinking had to change. It would  have been natural and understandable to try to dismantle all the trappings of the apartheid system (as the Sports Committee wanted to do) and the cultural symbols that went with it in the same way that the white government had tried to control the cultural symbols, economic freedom and education of the majority black population previously.

The shift in Mandela’s thinking and the challenging of widely held assumptions allowed him to open up new and counter-intuitive ways of doing things and make a paradigm shift and stop doing the wrong thing. Of course, South Africa winning the world cup helped, but the donning of the Springbok shirt with the captain Pienaar’s number 6 on the back just before kick-off was a visual symbol of the change in his thinking to both black and white populations.

What Mandela demonstrated so powerfully is that there is a systemic relationship between the way we think and the influence that has on how we design action strategies and outcomes. Actions are a consequence of thinking. If we change our thinking, we potentially open up new and astounding possibilities. If you carry on doing what you’ve always done then you will always get what you currently have. 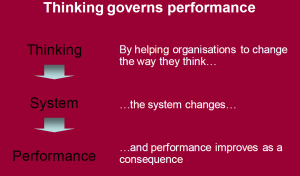 In today’s world there is a dominant paradigm of thinking that is heavily influenced by the current conventions of management. But, conventional management thinking contains many traditions that need to be questioned for while they may be normal they are not productive.

In education and career system terms, these conventions and assumptions inform such action strategies as targets and league tables which drive what teachers do to the detriment of real learning (teaching to the test); coercive inspection regimes that threaten special measures if ‘standards’ slip; contracts with payment by results clauses which cause external service providers to ‘cream’ the low hanging fruit and ‘park’ the harder to reach; funding mechanisms which mean students are taken down a route (6th form / A-levels) that is not necessarily in their best interests. Others that spring to mind are the over-reliance on standards and professional qualifications; benchmarking and transnational comparisons (PISA); digital by default services and the tendency to standardise service provision. All are based on a set of assumptions and conventions which can be shown to be deeply flawed if you take the time to study and understand the world from a systems perspective.

Like Mandela, we need to challenge the assumptions that underpin the current design of the careers education system and the wider education system. Without such challenge, we shall continue to do the ‘wrong thing righter’ and miss opportunities for a real step change in performance.  We need to take a leaf out of Mandela’s book and work at the level of Thinking / Assumption to design new action strategies that lead to better outcomes.

Currently our thinking is focused at the action strategy level (more of the same). Tighter targets; more  inspection; better guidance for schools; standards; careers qualifications; provide information on line; put employers into schools to inspire. These strategies will at best have low levels of impact in terms of outcomes and at the other extreme might make things worse.

(For the avoidance of doubt, I am not arguing for more money to be thrown at the problems we have in our education system. We do not have a resource problem, we have an effectiveness problem.)

The current system is having a negative impact on many lives leading to poor attainment and poor career choices. It will take great resilience on the part of the learner to remain “Captain of their soul” in the current system.